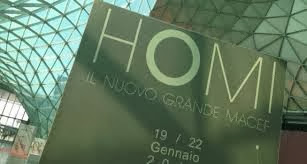 Macef Hands It Over To HOMI

With 1,300 exhibitors, 18% of whom from countries other than Italy, the Macef Home Show attracted 82,620 trade visitors (up 2% compared to September 2012). The industry interpreted this increase as a sign of confidence: despite no change in the number of Italian buyers attending the event, the influx of foreign buyers was up. The Russian contingent headed the list with 554 buyers, but the most spectacular performance undoubtedly came from Turkey, whose 251 buyers put the increase compared to last year into double digits. China, Japan and the US remained steady, with Greece showing a slight improvement (+5%), as opposed to decreases in the number of visitors from France, Spain and Germany (- 15%), confirming the uncertainties still simmering across the Eurozone.  This year’s figures are a fitting backdrop to the launch of HOMI, as MACEF will be known starting from the next event due to take place from 19 to 22 January 2014. HOMI, the new trade fair centred squarely on the style and surroundings of the individual, will leverage the values and success of the last Macef show, and embody a whole new concept in trade fairs. “HOMI’s birthplace is clearly Milan. And it fits the local lifestyle to a T. But the show’s outlook is already unquestionably international”, states Enrico Pazzali, Chief Executive Officer of Fiera Milano. “After fifty years we decided to give Macef a brand new identity. The change had to happen if we were to continue meeting the needs of consumers. Today’s market spans the entire globe and we simply could not afford to miss this growth opportunity. The first three markets we will be tackling,” said Pazzali, “are Asia, Russia and the United States." Of course, behind every major innovation lie the skills, passions and ideas of people who thrive in a team environment. This exciting new development will be steered by: Cristian Preiata, Exhibition Manager, Alessandro Agrati, Art Director and Etienne Cochet, Strategic Advisor.