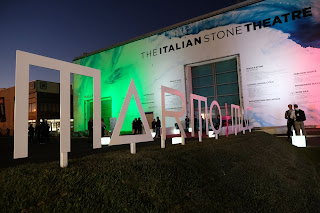 Verona, 29 September 2018 - Growing operators from the United States, China, India and Russia; those from European countries are stable, with Germany and Spain always in the lead, while new opportunities are opening up in Africa and East Asia. Now closed at Veronafiere, the 53rd edition of Marmomac is confirmed as a barometer on the world market of the stone industry and processing technologies and the center of global trade in the sector.

The role of Marmomac as a leading business platform year after year is strengthened, thanks to an ever increasing rate of internationality. Over 60% of the 1,600 exhibiting companies came from abroad. Of the 68 thousand visitors who arrived in Verona in four days, 62% were foreigners, against a 60% share recorded in 2017. New record also on the front of the nations represented, which reached 150, compared to 147 of the previous edition. The countries of the top buyers 'and architects' trade delegations also increased, from 55 in 2017 to 65 this year. 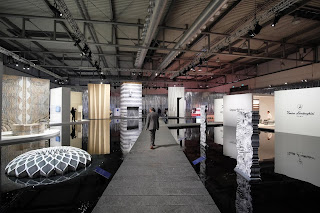 These are numbers that multiply the opportunity to close business and explore new destinations for their products. The results of the b2b meetings at Marmomac have returned a photograph of the sector that sees the dominance of Made in Italy for added value, both for processed materials and technologies. The reference markets indicated by Italian companies remain North America, China, India and Russia, but this year a greater interest is reported also in terms of contacts with specialized operators from Japan, South Korea, Vietnam, Malaysia and Indochina. Within Europe, the stone trade remains stable, while the one towards the Arab countries of the Middle East, Israel, South Africa, Brazil and Mexico is strengthened.

With regard to foreign exhibitors, the Iranian exhibitors reported a sold out of the raw and semi-finished blocks exposed, bought in particular by Italian and German buyers. The companies in the Balkan area and Turkey have also been satisfied (20% more), the latter present in strength despite the Turkish Lira crisis.

"Even this edition of Marmomac - comments Maurizio Danese, president of Veronafiere - has achieved the objective of supplying the world's natural stone supply chain with the most effective tool for its development. Thanks to the ability of a leading international fair like VeronaFiere to promote a manufacturing sector through creativity, culture and innovation. In this the collaboration with the Institutions and the trade associations was fundamental, in particular the Ministry for Economic Development, the ICE Agency and Confindustria Marmomacchine ".
A success also due to the intuition of joining the b2b part of the fair, the world of architecture, design, art and luxury brands, to enhance the functional and aesthetic potential of marble. It is a concept that at Marmomac finds its synthesis in 'The Italian Stone Theater', the pavilion that tells the interaction between natural stone and Italian processing technologies, thanks to avant-garde installations by famous international designers. An exhibition space that this year received the institutional visits of Michele Geraci, undersecretary of the Ministry for Economic Development, and of Mattia Fantinati, undersecretary of the Public Administration. 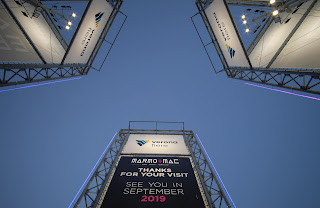 "Marmomac is the true center of the international community of the stone industry and market thermometer - explains Giovanni Mantovani, Veronafiere's general manager -. During these four days of the event we have recovered from the companies and buyers present a very positive sentiment on the front of the business, which makes us be optimistic for the final balance of global exchanges at the end of the year. This 2018 edition saw further growth in terms of the quality of the operators, as well as of arrivals from abroad, which increased by 2% of the total number of visitors. We are already thinking about the consolidation of the network of events connected abroad: in addition to Vitória Stone Fair-Marmomac Latin America, in Brazil, we are working on further development in the United States, with TISE-StoneExpo Marmomac in Las Vegas, in agreement with the American partner of Informa Group ".